"The poster's spirit is in the vein of my self-published zine Souvenir made and released last summer during a month-long stay in Astoria, Oregon. Based on the concept of the souvenir, the zine focused on gathering and arranging images, logos and text found in and around the Astoria area--from loose papers and photocopied instructive materials found at thrift shops, books perused at various libraries and free boxes to the scenery passing by. Although there are some original images, poems and drawings, the zine was meant to be reflective of my immediate experience, expressive without pressure to be an originator of content, and personal while still being spirited and accessible.

Enigma Variations was originally an orchestral work of 14 variations on a theme composed by self-taught composer Edward Elgar and was later used as the title of a show of works by artists Philip Guston and Giorgio De Chirico. Elgar describes his compositions as being sketches of his friends--(from wiki): "The sketches are not ‘portraits’ but each variation contains a distinct idea founded on some particular personality or perhaps on some incident known only to two people. This is the basis of the composition, but the work may be listened to as a ‘piece of music’ apart from any extraneous consideration." Later, the artists' exhibition focused largely on the influence of de Chirico in Guston's works, drawing connections to similar forms, motifs and themes as the artists moved through their respective developments; a unique interplay between two people.

Femmenigma Variations is a collection of images and text that contain distinct ideas and personal references, the exact source of which are most known only to myself, but which are drawn from various specific and accessible origins. The images, though referencing personal experiences and interests, may be read and viewed as a whole, "apart from any extraneous consideration."

The word Femmenigma is a nice wordplay to me because the images and text are aiming to be most directly relatable to women, with visual themes running from specific fashion sources, textile motifs, quilting patterns, dolls, clothing tags and more--which are most often associated with the feminine. Visual cues aside, I wanted to make a poster for women that was empowering and honest without being all Live Laugh Love while still being a personal expression at the same time. Growing up female, I am still surprised by the effect social conditioning has had on me and find I am still giving myself space to feel valid and heard. In that sense, this poster is a practice in doing just that. So this poster is not meant to adhere to or play within gender roles, but to make space for the woman's experience as I experience it, to give voice to myself and possibly others like me. And although I have many thoughts behind the making and the meaning of this piece to me, it is meant to be lighthearted but strong, a quick read with lots of details to go back to, a clear bright song in the dark of night.

Life is puzzling and chaotic no matter your gender. Please enjoy this humble array." 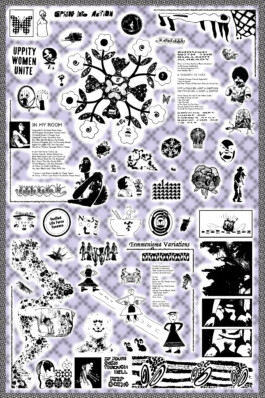 Caley Feeney is a visual and performance artist based in Portland, Oregon. Originally from Anchorage, Alaska, she has lived in Portland since 2006. Her works have been exhibited in Portland as well as in Philadelphia and Toronto. Documentation of her most recent 2-person exhibition with Norwegian artist Tori Wrånes at Disjecta Contemporary Art Center in Portland can be found on her website.