Heather Benjamin
"Death of a Tail"


“Death of a Tail” marks a departure for Benjamin. Having spent years with her practice firmly rooted in DIY zine and comics culture, her drawings have typically been made with the intent of mass reproduction, through photocopying and screen printing. With this body of work, Benjamin moves in a new direction, creating works whose primary motivations are not exclusively to be reproduced and reprinted as their final form, but are instead made to be viewed as singular and precious objects. For the artist, this new intention opens up infinite possibilities to experiment with scale, color, and medium, in ways she had not yet attempted. Benjamin here shows both works on paper and on canvas, the latter of which is a first for her. The works range from the most minuscule of talismans to larger than life representations of the female creatures that, until now, have lived only in the pages of her artist’s books and foldout zines for which she became known over the last several years.

The subjects of this exhibition are a logical continuation of the larger narrative of Benjamin’s body of work - she explores, through her depictions of half woman, half animal beings in various states of rapture, the female human experience, as she knows it. Benjamin muses on intimacy, sexuality, self-perception, body dysmorphia, and trauma through her avatars. Her work is diaristic, approaching her subjects through the lens of her own personal experience; each work can easily feel like a self portrait. Her women are simultaneously self-assured and crumbled, standing defiantly on their own two hairy legs, yet seeking the shoulder of an empathetic viewer to cry on. Benjamin uses her work to sort through her own trauma and self-analysis, and seeks to give faces, bodies, and narratives to the different facets of her own womanhood. Through that excavation, she reaches for more universal ideas and truths about the relationships people have to each other and to themselves, hoping to guide herself through the abjections and frustrations of her womanhood towards a greater sense of self acceptance and actualization. 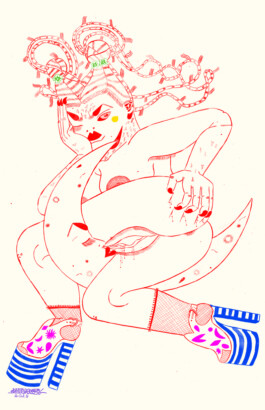 All images courtesy of Shelby Sells

Heather Benjamin (b. 1989, Tarrytown, New York) lives and works in Providence, RI. She graduated from the Rhode Island School of Design in 2016 with a BFA in Printmaking. She has shown her work nationally, including at the Fountain Art Fair at Miami Art Basel, Andrew Edlin, Invisible Exports, 1:1, and more. She has exhibited internationally in Barcelona, Madrid, London, and Rio De Janeiro. In addition, she has exhibited her work extensively at multiple art book fairs, including having tabled at Printed Matter’s NY Art Book Fair at PS1 each year since 2009. Benjamin is also a recipient of a self-publishing grant from Printed Matter in conjunction with the Andy Warhol Foundation for the Visual Arts. Benjamin has been self-publishing zines of her drawings since 2008. The ten issues of her first zine series, “Sad Sex”, were published as an anthology of the same name by Desert Island in 2012. The following year, Benjamin released her second collection of 70 drawings, published by A Bolha Editora in Rio De Janeiro. Since 2015, Benjamin has self-published several more full length books of her drawings, including “Romantic Story” in 2015 and “The Collapsing Woman” in 2017, as well as made other book projects and print editions with various publishers. She is currently working on two more book projects, to be released simultaneously at an exhibition of her work, by Sacred Bones in 2018.

Dress Shop Gallery is an artist-run gallery space located at 322 Troutman Street in Brooklyn, New York. The gallery is open by appointment.