This image is modeled after surgical paintings produced between the early 1800’s and the mid-1950’s, rendered by anatomy painters, pioneer surgeons, and doctors, in a time when human potential and the potential of science must of seemed to be bursting at the bosom. These paintings were made at the dawn of antiseptic surgery, anesthesia and later the early days of the era of antibiotics. In such times the possibility of human innovation might have seemed infinite, hubris was on the rise and it might have felt as if mortality and human finitude was going extinct.

In his book Heros: Mass Murder and Suicide, Franco “Bifo” Berardi writes, “Modern culture and Political imagination have emphasized the virtues of youth, of passion and energy, aggressiveness and growth.” The notion of exhaustion has always been anathema to the discourse of modernity of Romantic Sturn und Drang, of the Faustian drive to immortality, the endless thirst for economic growth and profit, the denial of organic limits. The bodies of the infirmed and injured evidence the limits of the body and the myth of infinite growth. The wooden sign at the healing center reads “Life is growth” — I’m not so sure. In the image, our model takes on the look, style, and dress, of the infirmed. Masked and draped are their Dionysian good looks; bandaged are their dewy skin, rose cheeks and blooming lips. Performing their sick drag, they style themselves in exhaustion, and in defiance of a culture that denies the existence of limits. “We can’t put anymore bandaids on this one..” The fashion of the injured indicates the wearer's failure to assimilate to pace and expectations of a culture based on exceedingly unreasonable expectations. My vehicle breaks down on the roadside as others speed off into the distance. Did my engine fail because I was too poor to maintain it or or was the machinery defective from the start? Stephen Harrod Buhner writes, “there is a unique smell to hospitals, composed of equal parts illness, rubbing alcohol, fear and hope". Yet the hospital, clinic or hospice could alternatively be described as a fearless place, defying loss and death because everyone checks their subjectivity at the door. Under the doctor’s care, the subjectivity of the injured is abject. Jot down your history on these *forms*, ease off your subject hood, place your personal belongings *here*. Dress is homogenized, open-back, monochrome, a padded, protective, thigh high immobilizer with tightened velcro straps. One size, uni-sex, antimicrobial, non-skid pulled from a matching stack — a style you're not allowed to choose.

Is our model just another fashionable pawn like Derek Zoolander in Mugatu’s Derelicte, the fictional fashion line of the film Zoolander? In the film, Mugatu describes his line saying: “It is a fashion, a way of life, inspired by the very homeless, the bums the vagrants, who make our wonderful city so unique.” Does our figure stand a chance at expressing agency through their anhedonic gesture or their dolor — can you sell this style — or do their attempts a swimming upstream destine them for further disempowerment? 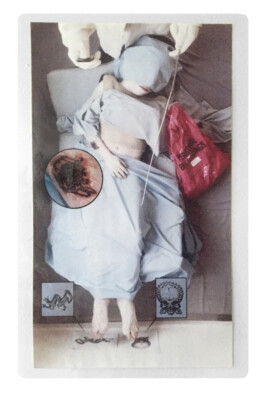 Keke Hunt (°1989, Atlanta) is California based interdisciplinary artist, currently working in writing, fashion, tattoo, and music. Hunt creates her work by curating, arranging and remixing sourced language and imagery often drawn from consumer products, online content, advertising, design, and network based content generators — like a spambot, Hunt harvests content from the web. In their excess, these formats beg be resampled. Like Idoru, the virtual pop-star of William Gibson’s 1996 novel, in true pop form, Hunt mines her personality from the wants and emotions of her fans from blogs on the internet. The content she collects toes the line between amourous and addicted, Careless and Insane, seductive and perverse, obedient and injured; her jean is boyfriend and distressed she is scary skinny and sexy skinny, her pouted lip natural, injected, and in anaphylaxis, all at once. Her project Betsy Ross Needle Co. is an investigation of “needle works” (i.e. fashion, sewing, tattoo, body modification, medical intervention and prosthesis) and divergent and exceptional examples of self styled feminines especially persons who use style to seek perceived empowerment and agency. Hunt is currently writing a new album and working on a Betsy Ross Needle Co 1 a full color reader which will be available this on her website this summer.