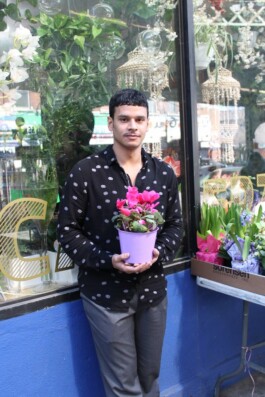 So, you're from Long Island, right? What is your background?

I grew up in Long Island. I was born in Puerto Rico and my family moved to New York when I was two. I was there until I was 20.

At which point you moved to Austin?

I moved to Austin around that time, when I was 22. I've been kind of a nomad.

What drew you there?

I had no real aim at the time. I just wanted to escape the cold winters and I had friends who had moved there, and that's how I landed there. But I really knew very little about Austin. I think that's what attracted me to it, though – I just wanted to have a different experience in a different part of the country.

When experiencing your work, I'm always struck by your intuitive use of symbolism. The way that you convey meaning through symbol takes on this psychological quality. I was wondering if you could talk a little bit about it.

I often reference different mythological motifs, one might say, or reinterpret different images of deities whether they are Egyptian or Greco-Roman, etc. I refer to all kinds of things – sometimes I'll interpret a tarot card, for a more specific example. It's something I do a lot – I'm always researching and reading about different occult-related topics.

Do you think of yourself as a mystic?

Sometimes I do. I mean, for me, the central theme is often Venus. I think a lot of my work is reinterpreting the symbolism of Venus. 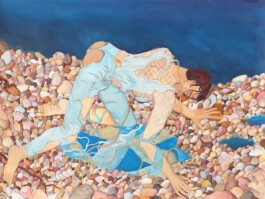 Jonny Negron, 'No Moon At All,' previously on view at Harpy Gallery, Rutherford, NJ

Beyond your attraction to Venusian symbolism, do you have any other esoteric interests?

My family was very religious, so I think that really influenced me. I was always interested in religious texts; I had to read a lot of different books, and the Bible, as a kid. I developed an interest in religions from history all throughout the world. It's been a long time.

You consistently use women as subjects. Why is that?

I think it's tied to my interest in the Venusian energies. These thick ladies – they represent feminine energy. I think creativity is a very feminine thing. As an artist, I employ a feminine side. In religious art, these figures are historically depicted, and a lot of the time they're masculine. In my work, men are absent. I mean, they're not always absent, but I don't want to emphasize that side as much. 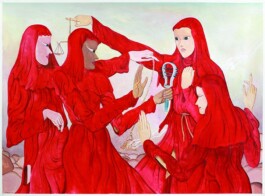 Who or what would you credit as your biggest artistic influences?

I've been drawing since I was able to hold a pencil or marker. I'm not from an artistic family, so being a child, a lot of the things that inspired me to draw were cartoons and video games. That's part of why I've retained that element in a lot of the work that I do. It's part of who I am. I like to keep this eclectic focus. I like that piece of my history to be included in the work.

Another catalyst in my artistic influence was anime. When I first had any exposure to anime – at my age, it wasn't as accessible as it is today. There was one magazine at the stationary store by my house that had one little section where they stocked anime. It was so bizarre to me, so obscure, and I was so intrigued by it. That influence is absolutely still there as well.

Have you ever done any fashion-based collaborations?

A few years ago I did pattern design for Creatures of the Wind. Some of the work that I did was in the collection; that was 2015? 2014?

Some of your pieces are incredibly referential of fashion.

I use a lot of visual reference in general, and often when I've depicted contemporary scenes, I usually reference actual garments. If it's a blouse, or something, I like to find an image of a blouse and look at the stitching, the way that the buttons are. That way, I feel like it's almost a document of what's happening now, through including fashion. Fashion has always been an interest of mine.

What is your process like? Do you find that you come to the work with a specific idea, or does it show up more organically?

Do you feel like there's a political element to your work, or do you want to distance yourself from that?

That's a good question. Honestly, I think that it is, but sometimes I feel like explaining art is like being a magician – "do I say everything?" To me, all art is political, if you really analyze it. It's all political.

Something about your work that I have always found striking is the "outsider" element present in your depictions. Your representations, particularly of human figures, sometimes seem intentionally tilted, intentionally warped. Is this something you consider consciously when creating your work?

I think I'm most interested in outsider art, and I feel like at heart, I'm an outsider artist. I didn't complete college; I did things my way. It's a combination of different things that really had an impact on me. In terms of the figures, also, I felt like the types of figures that I draw are really underrepresented. And it's cool to see now how much it's changed – it didn't feel that way when I started. It felt more rare than it is today. There's a lot more body positivity now; it's become more accepted, which I think is great.

You mentioned the artist as the magician, this process of revealing. Do you have a connection with that archetype? What does it mean to you?

Back to your question about the mystic – in some ways, I feel that way. Creating art is an aspect of spirituality and in that sense I think that sometimes the work can be seen as a prayer.

Are you a big reader?

Some would say so. I try to read. Right now, I have three books in my bag. Sometimes I'll read a page, and put it down. I'll give you an example [pulls books out of backpack: Carl Jung, Modern Man in Search of a Soul; Wilhelm Reich, The Function of the Orgasm; the I Ching]. There's this one here [Jung] and there's this one here [The I Ching]... they're all connected. Jung wrote the forward to this edition of the I Ching. And I won't read any of these straight through, I'd rather pick up the one that I'm interested in. It feels more like a conversation that way, rather than paying attention only to one voice.

I'm always reading a couple books at a time. They always are in conversation with one another, I find.

The luxury of owning a book is that you can stop and start whenever you want. There's no deadline.

What else have you been absorbing lately? Anything specific on your mind?

A lot of the recent work is related to Puerto Rico. The series I've been working on that are in the show at American Medium, all the pieces take place in a post-Hurricane Maria, Hurricane Irma landscape of wreckage and flooding. There's a lot of imagery of flooding. In that respect, the political aspect is there. 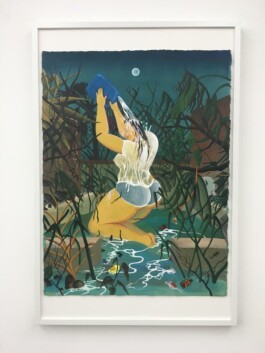 Jonny Negron, "My Cup Runneth Over," currently on view at American Medium.

But it's also a human rights issues. It shouldn't be seen as a "political issue." Everyone should be concerned with it.

I don't like to overtly deal with politics. It's not the way that I communicate, usually. But after what happened I felt very compelled to start making work about it. It's a very big part of who I am.

Do you see yourself staying in Austin in the long-term?

I plan to relocate and maybe move to LA. It might be too soon to say, but I might be doing a solo show in LA. But right now, in Austin, I really just work. I have a studio there. Austin feels like a bit of a dead end to me right now. A lot of creatives achieve success and then move on. It's unfortunate; it doesn't really help the creative community there. It doesn't have the infrastructure.

If you could work on a project right now and neither time nor money were a concern, what would you do?

I make music, and I'd love to produce an album or compositional piece. I'd also love to work in film or with video art. But really, as a creative person, in theory I want to do everything. By that I mean, I want to have a garden. I'd love to incorporate that with some kind of installation in the future. I love plant life. I'm gearing more towards including landscape in the work I do. I'm really influenced by Rousseau, by his thick foliage – his landscapes are very thick. He's kind of an outsider artist, as well.